In this series we are examining how to measure and analyze the revenue stream, if you didn’t catch the first, second, or third part I encourage you to start there first. In this section we are going to convert our revenue of our fictitious company into a Z-Score chart, show you a few things to look for and once again a few pitfalls to avoid. Z-Score differs from the other charting methods because it is both qualitative and quantitative, it can not only show you a picture of what’s going on, but also provide actual numbers, where the others cannot.

Click here to get our Sample Template Now!
Processing...

With each of the charts understanding how they work is a key selling point to change, most people will find revenue and percentage charting fairly straightforward, there will be a little more pushback on three-month running average simply because it’s more complex. Z-Score is a totally different animal as it’s based on standard deviation, which most people don’t remember from school, so there is a perceived level of “trickery” in the charting. Taking the time to overcome that perception is the key to acceptance, and as you will see with the results, it’s well worth the effort.

Standard deviation is the measured amount which varies around the average. So if the average is 10 and we are getting results of 8 and 12, we are deviating from our average by +/- 20%, if you take the difference from the average and do a little stats you get the Z-Score. You can learn more about it here if you want, but most people just figure out how to read it, and don’t concern themselves with the details.

Below is our little example: 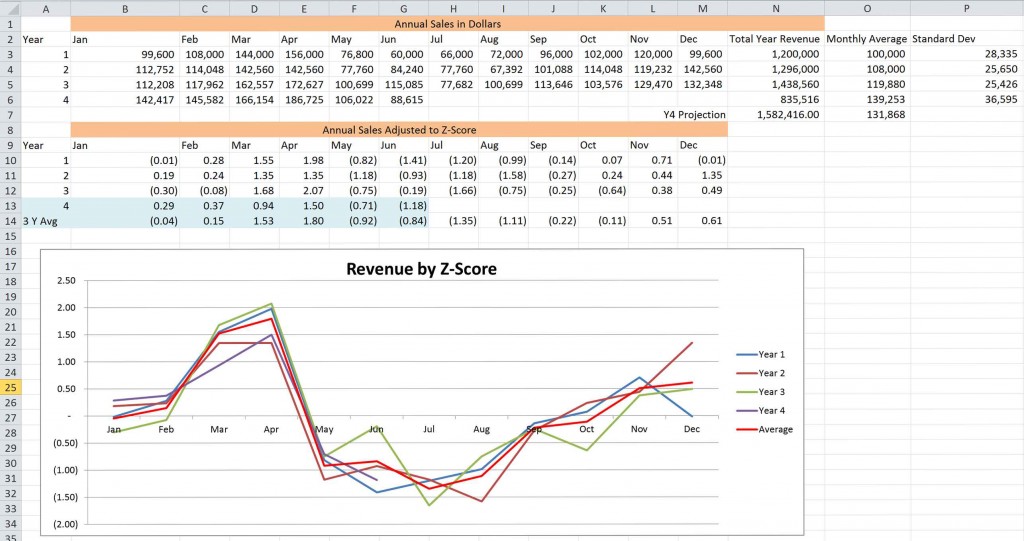 Let’s start with what we know: Column N is revenue totals, O is average for each month—that much is fairly self-explanatory—next is the standard deviation, which Excel calculates.

Let Excel do the work. You are an entrepreneur. Let the stats guy do the stats, just know how to read the chart and the story it tells.

From there we convert it to Z-Score by taking the actual revenue subtracting the average revenue and then dividing it by the standard deviation. In this case it’s (99,600-100,000)/28,335 which equals -0.01. This is done for all the cells in the sheet and then charted. So what does that really mean?

Imagine you’re riding a horse and your horse need to jump hurtles along the trail. Your average hurdle is $100,000 high (it’s a special horse). The first hurdle is $99,600 high, so the horse jumps it, but how much different was it from the normal? In this case it was 0.01 less than normal—fairly easy. As you go down the trail, you’re next hurdle is $108,000, and you know your horse can jump an average of $100,000 high, so now it needs to jump $8,000 higher than average, and it makes it. You can look below and see that it made it by .28 (don’t worry about what the number means). Just know your horse jumped .28 greater than average. Now you ride to March, and your horse needs to jump $144,000, you know that’s a stretch, but you magic horse jumps it again, this time at 1.55. Then April rolls around and that’s an even higher jump at $156,000 and a Z-Score of 1.98, “WOW,” you say. “This is such an awesome horse; it can jump almost two times standard deviation.” Great—now what does that mean?

We are charting revenue and a company must go down the trail, so it decided the hurdles it can jump on its own. In our month of April, it was only able to get $156k in revenue, it might have wanted more, but that’s what it did. So now we know our company can do a Z-Score of two if it needs to; our horse can stretch and jump that high. Knowing what your company can do, is the first step in knowing what it should do, since past performance is the basis for future performance, it establishes a reference from which to baseline trends.

When we look at our revenue chart, we notice that March and April are our big months, and our horse better learn how to jump real high in those months, otherwise we will miss our projections. Our revenue looks pretty good for Year 4, it’s better than all the other years, but we’re trying to grow 10% from the previous year. Is what we’re seeing here good enough? Are we on our projection or are we going to have to do some major work later in the year to catch up? Which of course leads to other strategic questions about what should happen when we enter the lean months.

We took our Z-Scores and averaged out the previous three years, remember we are in Year 4, those are not included in the average, just Years 1–3. If you look at the picture above in the light blue section, you will see our horse jumped higher than average in January and February, tripped in March, and stumbled through April, in May it did better than average, and tripped again in June. Here it is charted out:

And you’ll see the purple line is Year 4 and the red line is the average. In March and April it is very evident there is a problem. This is the qualitative nature of the chart. It’s pretty easy to see something is wrong with our horse and it’s not performing as it should have. What makes this chart so great is that it is absolutely apples to apples comparison, the standard deviation and the Z-Score compensate for everything, it deals with the growth projection, and since we average year over year we compensate for seasonality. It is the gold standard for revenue charting.

In the case here, as owner that’s where you get to ask why didn’t the horse jump as high as it usually does in March and April and figure out what you need to do to fix the horse.

The biggest pitfall of this chart is having people understand it and believe in it. If you find yourself in a downward trend and you are presenting Z-Score for the first time, your team will turn on you and start gathering things for the fire. In our final section, we’ll discuss some of the ways to present the information and hopefully prevent a witch hunt.

Next in our series of measure and analyze the revenue stream we will convert Z-Score into quantifiable numbers. What makes this awesome is that it accounts for growth and seasonality, which makes it a very powerful tool in laying out your year in advance, and allows you to determine where you’re at in reference to the projections. Really good stuff.