California is the number one agricultural state by dollars—almost $32 billion this year—which is almost twice as much as number two, Texas, which pulls in about $16.5 billion. With this amount of crops you would think with this agricultural powerhouse you would be able to go to the store and actually buy good veggies. Nope, not the case. Stores in California have some of the blandest vegetables I have ever had. When we lived in Maine, we would take a family trip down to Doles Orchard and get good produce, honest, good food. I miss those days.

This puts an incredible premium on fresh veggies. In my case I built a greenhouse; it not only gives me something to do, which I find enjoyable, but it also provides a reasonable flow of fresh produce. I grow mostly tomatoes, some peppers, and lettuce—pretty much what goes in a salad. Inevitably there are times when I end up with far more tomatoes than I can possibly eat, so I started giving them to my Dad and friends every so often. It didn’t take long for this little arrangement to turn from “Would you like a few tomatoes?” to “When are you going to bring in more tomatoes?” As a result, I now have some pretty demanding customers, mostly my Dad, but a few others as well, and I don’t like to disappoint them. Of course I don’t charge for anything, but if a tomato makes them happy, and happiness goes a long way to making my little world a better place, I provide as many tomatoes as I possibly can. If you have parents you understand how this works. No matter the age, the game is the same; make your folks happy and your life is better too. I’m writing this in January, and tomatoes are getting pretty scarce in the greenhouse and because of the changing weather this time of year, tomatoes don’t do so well. They crack and split and sometimes get a little funky looking on the vine, but each week or so, I find the best looking ones I have and ship them off to the old man. That leaves me with the funky bunch of tomatoes.

Here is how to be an entrepreneur and turn a bunch of ugly tomatoes that you can’t even give away into something valuable: bruschetta

If you don’t know what bruschetta it, just think of it as Italian salsa that usually gets served on thinly cut toasted bread, which is also way to get rid of the stale baguette after the holidays too. 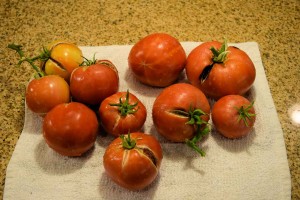 Start with the funky bunch. 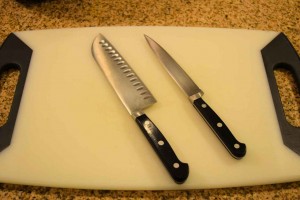 Get your station set up. You’re going to need a big bowl and a bag to put the funky parts in. 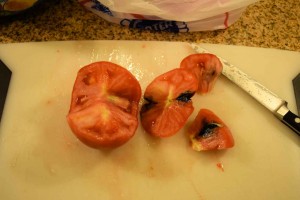 Whatever doesn’t look appealing just cut off. I did this while everybody was out after Christmas shopping and it would have been a lot harder to “sell” this to the family if they knew of its checkered past. 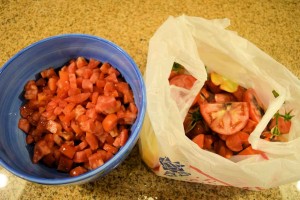 I had about a 40% loss rate, but that was against tomatoes that were 100% funky and would have been thrown away otherwise. So in economic theory, it 100% gain. Very entrepreneurial! 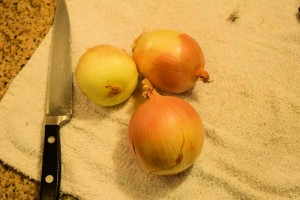 I had some onions that had seen better days too. 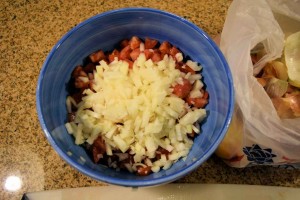 Dice them up and throw them in too, I just estimate the measurements, but depending on how much you like onions, I go with about one cup chopped onions for every three cups of diced tomatoes. 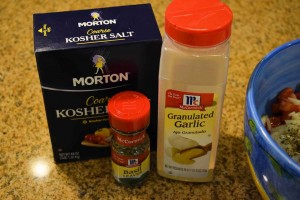 I then dump in some of the spices I love so much—once again this is to taste— because the tomatoes need quite a bit of salt to balance them out. Powdered garlic is just easier than crushing cloves, and the same with basil. This isn’t rocket science: just estimate a starting point and you can add more later. 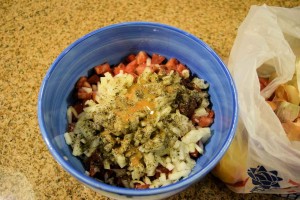 I dumped about half a cup of olive oil over everything. 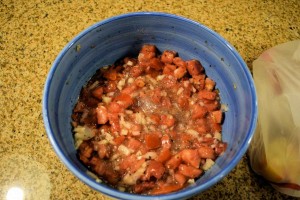 Give it all a little stir and this is what it looks like. If you need to touch up your spices, now is a good time to do it. Done right, you want it to be a little salty, and a little light on the garlic and basil. After this step, cover it and let it rest for a little while, and hour or two, if you’re pressed for time, leave it on the counter as it will help it mellow out quicker. 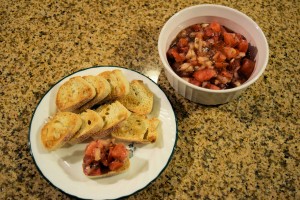 I found an unloved baguette and cut it in quarter inch slices, then toasted it up. Plate it up and make it look pretty.

All said and done, everybody thought it was pretty good—better than we’ve had in some restaurants—and seeing I used a bunch of tomatoes that would have otherwise gone to waste I was feeling pretty good about the whole project. Even after we ate it I didn’t tell my family about the history of the tomatoes; they’ve seen me make bruschetta plenty of times with good-looking tomatoes, so I’ll let them assume the best. Plus, I have some even uglier ones ripening up now, and it looks like we’ll be having bruschetta next week too!

As a side note, last summer one of my tomato plants fell when its guide string broke, so I had about two gallons of green tomatoes. After a little web research I figured out how to make a pretty mean salsa verde. Maybe I’ll post that later this year.