I have been one of those employees. I have hated almost every single one of my bosses. I normally don’t hate anyone, though, so there are definitely reasons why I felt this way. I was happy to learn that I am not alone, because I am riding along with that one-third.

The interesting thing is that a lot of people who have horrible bosses and hate their bosses, still stay in their jobs4. They dread going into work, lack motivation to do anything while there, and while at work might do things to thwart their boss’s progress. Why? Because their boss is a jerk and often, when bosses treat people unfairly, there is retaliation.

I am a pretty loyal person. When I sign on with a company, I want to stick it out until the bitter end. The unfortunate reality, however, is that can’t always happen. Once my attitude, or perception, of my boss changes, I have a choice: I can stay in the job and be a horrible employee by being unproductive, or I can find another job and leave.

Why is there this trend of boss hatred? What do bosses do that make their employees hate them?

Well, from my point of view, I have worked for some really horrible bosses: Machiavellian bosses, narcissistic bosses, and just plain psychopathic bosses. Now, before you think I am overstating my experiences, I want to explain these types of personalities, and you will realize that either you are this type of boss, or you have worked for one.

One of my bosses was cynical and unethical. She had great disregard for the establishment and had her employees do her private errands on the establishment’s dime. This lack of ethics was only matched by her self-interest. She only really cared about personal gain and would often reprimand her employees when they failed to do her bidding. I called her Ms. Jerk under my breath, and I hated her and her Machiavellian ways. I was so happy when I turned in my resignation that I never looked back.

My experience with a narcissistic boss was one of turmoil, dread, and almost emotional abuse. He was arrogant, self-absorbed, hostile, and had a sense of entitlement. But the most interesting quality of this boss was that he had very fragile self-esteem. His behavior went from praising me to tearing me down. He would compliment my work only to come back and tell me he was mistaken to believe in me. He went so far as to attempt to isolate me from my coworkers and control everything I did. He was a jerk. I hated him, probably more than my Machiavellian boss. I’m not saying I wanted to cause him harm, but I sure did hope that karma would intervene.

Ted Bundy doesn’t have anything on the psychopathic bosses I’ve had. They didn’t go around killing anyone, but I often wondered if that wasn’t their goal: to kill off their employees slowly and painfully. Psychopathic bosses are manipulative. They lie and con you into doing things. They are lazy, push responsibility on other people, can’t make good decisions, and can’t keep to a decision to save their life. But on top of it all, they are charming, which is probably why they can do everything they do and get away with it.

One psychopathic boss treated me like I was the golden child. She wanted me to tell my coworkers how to fix their work, to reprimand them. I was the one that passed on messages, drafted memos for her, and figured out the schedule. I loved this attention, but I was so naïve. I was the new employee, so I was overstepping my bounds at her command. I ended up stepping on the toes of my coworkers, which caused me to be hated.

I realized what my boss was doing when I was instructed to transcribe my coworkers’ phone calls. I had become the office snitch and I didn’t want to be. When my coworkers found out the work I was doing, because my boss told them, my time at that job was limited. It was one of those, “I don’t really have to leave, but I can’t really stay” situations. What I learned from this psychopathic boss was invaluable, if not also traumatizing. She was the biggest jerk of them all and I hated her, but I also loved her. I often wish we were friends. 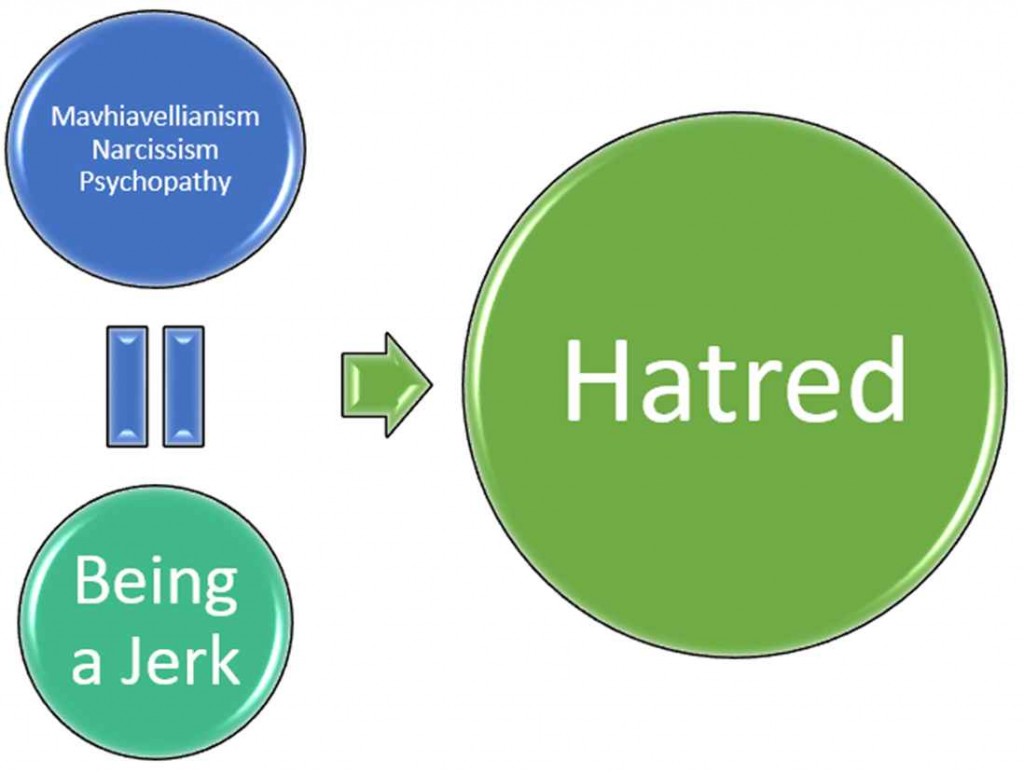 Most bosses don’t believe they are Machiavellian, narcissistic, or psychopathic, but the reality is they are5. In fact, they could be a little bit of each of them. The interesting thing is that the traits of these three personality types are often touted as desirable for leaders. Well, maybe not the lying or the conning, but the idea that a person can improve a company, whether through manipulation or skewed ethics, is high on an organization’s priority.

Attitude and personality work together. Treating employees a certain way can elicit love or hatred.

A boss’s attitude can make or break productivity. In fact, it is directly related to employee turnover rate, job satisfaction, organizational commitment, stress, and overall well-being.

Attitude could also cause employees to exhibit counterproductive work behavior, work against their boss and the organization, or retaliate, which might not be pretty.

Fairness can really impact how employees feel about their bosses, but can also make or break an organization. Maybe I’m trying to live in a perfect world where people are all treated the same. Maybe that can’t happen, but if it doesn’t, or if I feel as though I am being treated unfairly, then my perception of my boss, my job, and the organization changes.

What is ethical to me, might not be ethical to you. However, every organization should have an ethics policy that outlines what is acceptable and what isn’t. This is normally so vague that there is no specific way to determine what is unethical, unless the boss says that it is. Researchers have discovered that the boss really creates the ethical climate. If they say something is ethical, even if you think it isn’t, then guess what? It’s ethical and your ethics are wrong!

A huge problem in organizations is that they are left to police themselves, unless something illegal happens5. Unethical behavior does not necessarily equal illegal activity, which means if the boss says it’s okay, then it is allowed to continue. How a boss reacts to unethical behavior, or if they engage in unethical behavior, can alter their employees’ perception of them.

Employees hate their boss for a reason. Behaviors, attitudes, and personality are directly related to how an employee feels about their boss. Ultimately, it’s the boss’s fault. But guess what? Because your boss is Machiavellian, narcissistic, psychopathic, or possibly all three, they don’t care. They have no conscience! So, continue to hate, be unproductive, unmotivated, and dread going into work, or be proactive, love yourself, and figure out something else to do. That’s what I did.

Margaret obtained her M.S. in Organizational Psychology and Nonprofit Management in 2014 after spending a decade focused on homeschooling her four children. She is currently pursuing a Ph.D. in Health Psychology and has earned a certification in stress management coaching. When she is not studying, she spends time working as a freelance writer and a certified stress management and business coach for employers around the world.